Justice said that there are obstacles in business that have to be overcome. The same is true for government.

Monongalia, Preston, Harrison and Marion counties are doing a great job, he said, and the area has an incredible future at its fingertips. North Central West Virginia has issues to deal with and it has opportunities, he said.

In order take advantage of these opportunities, the area needs to have a plan from state government that helps it, Justice said.

He wants to give the region and the state a plan, but there is a problem in state government, he said.

“We don’t really have a plan,” Justice said about the state government.

Justice said the Legislature needs to look at the real issues of the state: the $500 million deficit and the repeated use of the Rainy Day Fund.

West Virginia, he said, is in a real mess, but North Central West Virginia is blessed because the area is knocking it out of the park. There are areas of the state that are not like this, and they will have a negative impact on this area, Justice said.

Justice explained the budget he wants and the budget that he vetoed that was presented to him by the Legislature.

Some people are saying that Justice wants to raise taxes, while the other wants to live within the state’s means.

That is missing the story, he said.

Last year, more than 700 people died in this state due to drug overdoses. If money is cut from DHHR,  then thousands of people would die from drug-related issues, Justice said. The Legislature’s budget would also cause the state to turn its back on autistic children and seniors, he said.

The Legislature’s budget would have cut funds from Marshall University, West Virginia University and other schools. That budget would also not grant pay raises for teachers. There would be no money for tourism marketing, Justice said.

The budget presented to Justice would have given no money for highway projects, and the 4,800 jobs that would come with these projects would not come to the state. There would also be cuts to the State Police and Department of Corrections, he said.

The Legislature’s budget would have used $90 million from the Rainy Day Fund. West Virginia’s debt rating was lowered this year due to the state’s past use of the fund. It would be lowered further if the state uses it again, Justice said.

If he had approved the budget, there would have been no plan plan to get the state out of the mess it is in, he added.

Justice’s budget plan would have government, businesses, people and the very wealthy all participating.

In Justice’s budget plan, small businesses would pay a tax of $12 a year. The sales tax would be raised a half of a penny and there would be a commercial activity tax (CAT) tax of .0025 percent, he said.

If all these measures were put in place, the state could still immediately lower the state income tax, he said.

Out of this the state would gain $2.4 billion for road work and 48,000 new jobs related to the road work. Also the state would get money for teacher pay raises, help for veterans and for tourism marketing, Justice said.

The state could even get rid of the gas tax increase and the CAT tax after things got better, he said.

Justice said his budget plan would create $120 million to use to eradicate the drug problem in this state.

His budget plan is not about taxes. It is a real live plan. It is not perfect, but it is a plan, he said.

Justice said he believes that if he could get in a room with state Senate President Mitch Carmichael, R-Jackson, for five minutes they could solve the whole budget problem.

Justice said the reports about him meeting with Carmichael and not letting Speaker of the House Tim Armstead, R-Kanawha, know about it is not true.

“The problem with myself and Tim (Armstead) is Tim really believes just this — he believes he can broaden the base and take away the exemptions,” Justice said.

“Basically what that’s going to do is direct use taxes. From a standpoint, that’s business against business or business taxing business. If you can go to that, then you need to be calling Tim and encouraging him. But I bet my life that you can’t go for that once you really know what’s what.”

Armstead would like to modestly lower the consumer sales tax and then there would be a $200 million hole affecting funding for higher education, K-12 education and the DHHR. That’s Armstead’s plan, Justice said.

Justice said he is willing to negotiate and listen to anything that’s reason, if there’s a plan.

“I don’t want one thing from this,” Justice said of his governorship. “I want greatness for this wonderful state and for you. I don’t need any more gold rings. At the end of the day all I want is goodness.”

“It was more than I had expected, so (I was) very, very pleased with the outcome,” she said. “(I was) very pleased with our speakers today. They talked a lot about where we are in this state, where we need to be and some of the issues with North Central West Virginia. I think this was just great, one of the best.”

President of the Harrison County Chamber of Commerce Kathy Wagner thought that the summit went great as well.

“We had a great turnout today, (a) great lineup of speakers,” she said. “(We) capped it off with the governor’s presentation here this afternoon.There’s a lot of potential in North Central West Virginia, and it’s obvious from every presentation today that the business leaders are key to moving us forward. That’s really what the chambers are all about, connecting our business leaders and forging new empires throughout the region.”

Executive Director of the Preston County Chamber of Commerce Kristy Ash thought that the summit went wonderfully, she said.

“This is my first year being involved with this, the first year that Preston County has been invited to this (event) with the chambers,” she said. “So we really appreciate that and (hope to) continue this in the future.”

“It’s always enlightening and encouraging when we bring together our chambers,” she said. “I did consulting work in other parts of the state these last two years, and there’s quite a difference. And the message is different and the vibe is different. I think that we’re challenged as leaders that we have to do smarter things so the rest of the state will follow us.”

West Virginia GOP will meet at Oglebay Park in Wheeling

By JOSELYN KING The Intelligencer and Wheeling News-Register WHEELING, W.Va. — West Virginia Republicans have said they will…
byDon Smith 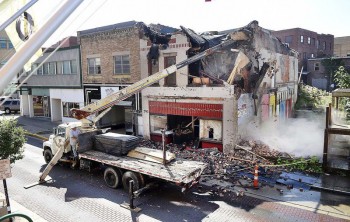 BECKLEY, W.Va. — Mounds of brick, busted slabs of concrete and broken wood planks are all that remain…
byBrian Canterbury