CHARLESTON, W.Va.  — Gov. Jim Justice said the upcoming vote for the state road bond referendum will be one of the most important votes residents in the state will ever make.

The vote is asking for approval of the sale of $1.6 billion in bonds over four years for road improvement projects across the state, including road repair, new road construction and finishing projects at various points in their development. The governor is looking for tax revenue to invest in the bonds to be leveraged into money to do the work.

Justice said the state has ranked toward the bottom in polls, the state is losing population, needs to be able to attract development and increase its tax base.

”We have to have something that can bring in immediate jobs,” Justice said. ”(Through the proposed roads projects) We can create tens of thousands of new jobs.”

The projects would create around 48,000 jobs and result in $2.4 billion in roadwork and maintenance, Justice said.

Justice said many people have feared this proposal would end up raising taxes across the state, which he says is untrue. The funding mechanisms are already in place, he said.

”If we pass this, we would have to sell a bond and someone has to buy it on the other end,” Justice said.

The money to be leveraged would come from increases to the state’s annual vehicle registration fee from $30 to $50, raising West Virginia’s gasoline tax 3.3 percent and allowing residents the option of paying a yearly $8 flat fee to drive on the state’s toll roads, which is estimated to raise $132 million a year.

Smaller project have had portions started. However, the “lion’s share” of the jobs would be expected to be awarded in the spring, if the referendum passes, Justice said.

Justice talked about the Coalfield Expressway being finished in the southern part of the state as well as other projects.

The jobs created from the roads projects would generate hundreds of millions of dollars in income tax for the state, Justice said. Better roads help attract people and businesses to the state, he said.

All of the money raised through this bond issue would have to go to the road projects, he said.

”West Virginia has to pass this,” Justice said.

Smith said now is the perfect time to invest in infrastructure.

”This is the best deal for the state,” he said.

The governor wants as many of the proposed 48,000 jobs as possible to go to West Virginians, he said. The jobs will be structured where there will be a lot of on-the-job training, Justice said.

Also, any jobs that would have to go to workers from outside the state would still benefit the state as they would pay the state’s payroll tax, buy groceries and stay in local hotels, Justice said.

”We will still benefit from out-of-state workers,” Justice said.

”If we don’t have good roads, it is hard to bring in companies,” said Mike Clowser, executive director of the Contractors Association of West Virginia. ”These would be immediate jobs for people. Everyone would benefit.”

Officials remind state residents the last day to register to vote is Sept. 18. Early voting will take place Sept. 22-Oct. 4. The voting will be done by paper ballot. 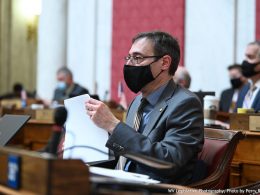 By David Beard, The Dominion Post MORGANTOWN, W.Va. – Every legislative session there are one or two prominent bills…
byErika Diehl