Woodyard said the Lubeck Volunteer Fire Department and the Parkersburg Fire Department responded to the scene at the former Ames plant, which had been burning for more than a week.

Woodyard said a substance on the steel beam could have reignited.

Stewart said the firefighters were not able to make it to the actual area from where the smoke was coming. 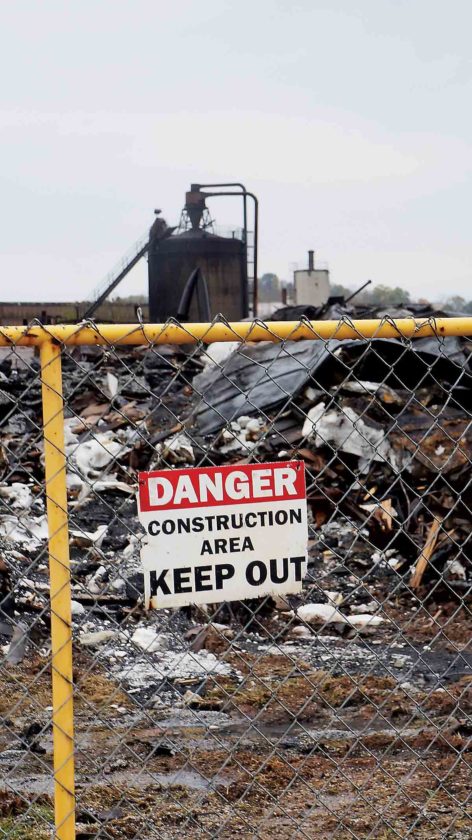 Photo by Michael Erb Fencing went up around the site of the IEI Plastics warehouse fire Wednesday. The property, which was the site of a massive fire that burned for more than a week, reverted to the owners Tuesday after the fire was declared extinguished Sunday and a 48-hour cooldown period had elapsed.

“There is a huge steel beam in the way we can’t move,” he said. “We poured 1,000 gallons of water on it but because of that beam we couldn’t get the water right on it, so it will continue to smoke.”

Stewart said the same thing happened over a two-month period after the Peoples Cartage fire in the 1980s.

Firefighters were on the scene for about an hour Wednesday evening.

Early Wednesday a fence has been erected around the site where the IEI Plastics warehouse burned and smoldered for more than a week, as state and local officials work to determine what caused the fire and how much fighting it and studying its impact have cost.

Among the unanswered questions is what was in the Camden Avenue facility that caught fire in the early morning hours of Oct. 21. The West Virginia Department of Environmental Protection last week issued an Order of Compliance requiring Intercontinental Export-Import to disclose the materials that were stored there.

On Tuesday, Lawrence Messina, director of communications for the West Virginia Department of Military Affairs and Public Safety, said the materials provided to the state Sunday and Monday “do not sufficiently satisfy the order.”

Sunny Naik, with IEI, disagreed with that statement Wednesday.

“I have no comment,” he said. “We’re working with everybody. We’re doing what we’re supposed to do.”

Messages to Messina about the next steps if the order was not complied with were not returned by Wednesday evening.

Messina’s statement on Tuesday also noted that since there were ongoing investigations into the matter, information would be released by the local Incident Command in conjunction with the Wood County Prosecuting Attorney’s Office.

Prosecutor Pat Lefebure said his office’s role will likely be related to announcing whether the fire was intentionally set. Questions about the proper storage of material and compliance with various regulations will likely be handled by other entities, he said.

“That’s more the role of the DEP and those” agencies, Lefebure said.

Wood County Commission President Blair Couch said officials are working to determine the costs of the incident and its aftermath and “putting a bill together.”

IEI’s owners “will have to pay, reimburse the county or the state, for fighting their fire,” he said.

Couch said estimates are still coming in so he did not want to give a specific amount Wednesday.

“It’s a large number,” he said, emphasizing that without the assurance of state assistance from Gov. Jim Justice last week, local entities would not have had the resources to fight the fire and extinguish it as quickly as it was.

“Without the governor’s assurance of making sure the county would be made whole, that fire would still be smoking to this day,” he said.

At Wednesday’s meeting of the Parkersburg Utility Board, Manager Eric Bennett said approximately 7.85 million gallons of PUB water were used fighting the fire. The majority of that occurred in the early days of the fire, before water started being pumped regularly from the Little Kanawha River.