From the Register Herald of Beckley:

A new government report presented to the West Virginia Legislature recommends removing public notices from your community newspaper and placing them on a state government website to reduce state spending.

Reducing government spending is important, but it should not come at the expense of an informed public.

In West Virginia today, the most cost effective method of ensuring local residents are notified of planned government actions and spending is placing a public notice in the community’s local newspaper.

In 2019, state government’s total spending budget for all state programs is $4.7 billion dollars.

Based on the state report, West Virginia government spending for public notice averages $2.55 per person — per year — to have public notices in the local newspapers where you can easily find and see them.

That seems a very cost effective method, especially when the newspaper industry already provides free internet distribution in many areas.

The report shows contempt for public notice, a shocking lack of awareness of living conditions outside of Charleston, and a self-serving view on state government spending.

The recommendations in this report would:

● Require citizens to search online each day for public notices.

● Require citizens time to load each link on a government website.

● Require our city and county officials to give up control of public notice to a state agency but to retain the responsibility, complaints and lawsuits.

● Ignore that internet service is non-existent in many areas and unreliable in others.

● Ignore that many residents would find the online search too challenging.

● Ignore the fact that not all residents have access to a computer and high speed internet.

● Eliminate the “community” awareness created by publication in the newspaper.

The report also misrepresents the value of West Virginia newspapers, which have an economic presence in all 55 counties and growing readership now with print and online editions.

Community newspapers are the marketplace of information in West Virginia, not a government website.

From birth to death and each step in between, community newspapers document life and history in our towns. Your newspaper features local high school sports, city council, church events, community dinners and obituaries.

The value of community newspaper publication is real. Businesses pay for advertising in local newspapers for a reason: That’s where local people look for news and information.

The Associated Press shares 10 things to know Thursday, May 22 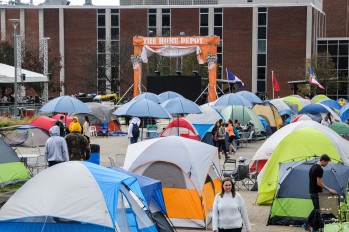 As ESPN’s GameDay nears, WVU has a tent city

CHARLESTON, W.Va. — Having made hundreds of stops around the country over the past 30 years, the crew…
byBrian Canterbury

By Steven Allen Adams, for The Intelligencer of Wheeling CHARLESTON, W.Va. — With just under six months until…
byDon Smith