PARKERSBURG, W.Va.  — Progress is being made in getting the fire put out at the Intercontinental Export-Import Plastics warehouse on Old Camden Avenue, the Wood County Commission president said Thursday.

Wood County Commission President Blair Couch reported to the commission at its regular meeting about continuing efforts to put out the fire that started early Saturday morning at the site of the former Ames shovel plant. Crews were working on the back end of the site spraying water, having excavators digging up hot spots and putting those out.

”The progress is evident,” Couch said. ”Their efforts are going very well.”

Crews from Specialized Professional Services Inc. (SPSI ) have brought in additional resources to help in their efforts.

Couch described a big unmanned nozzle that can be placed in a specific spot and used to spray water as the excavators go in to try to dig up the hot spots. 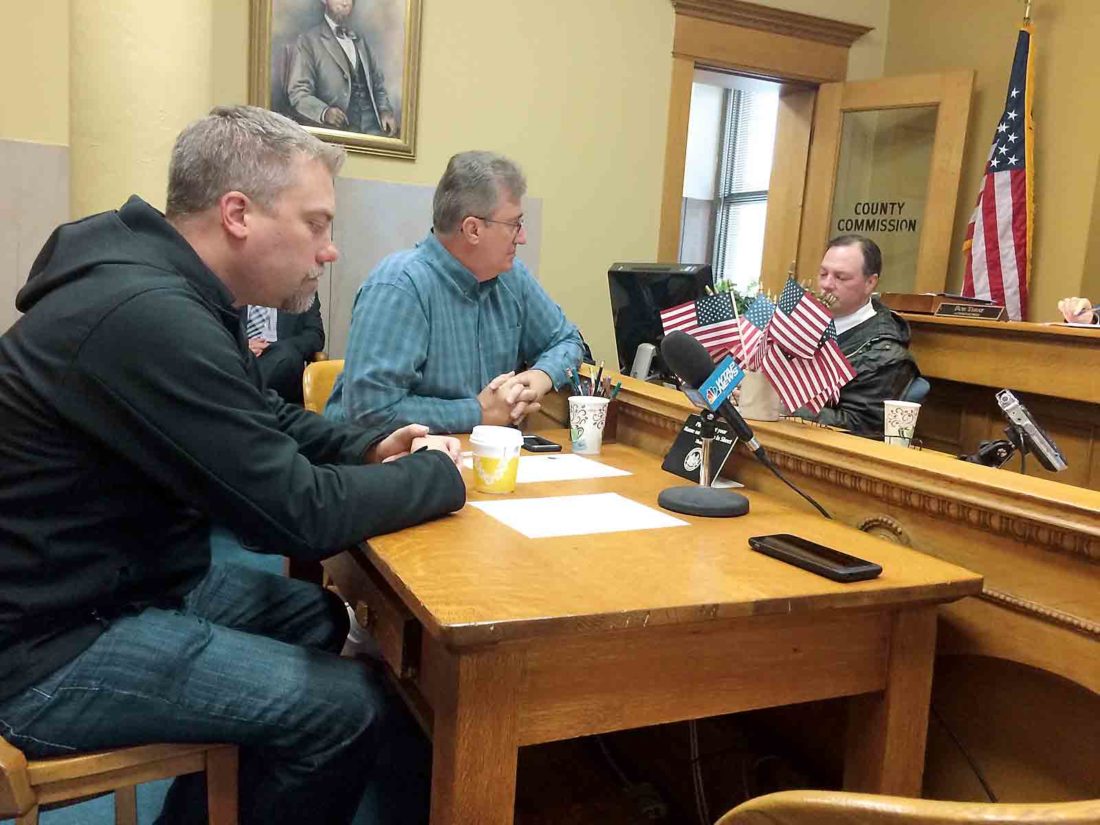 Paul Nony, left, toxicologist with Center for Toxicology and Environmental Health, L.L.C., and Wood County 911 Director Rick Woodyard addressed the Wood County Commission Thursday about efforts at the site of the fire at the Intercontinental Export-Import Plastics warehouse on Old Camden Avenue. Commission President Blair Couch, right, looks up information related to the fire on a computer. (Photo by Brett Dunlap)

”They have made a lot of progress up into the site,” he said. ”They are trying to clear out some of the debris so they have more room to work. It is an amazing operation.”

Crews have pumps in place and have three lines running up from the Little Kanawha River.

The reliance on City of Parkersburg water supplies has diminished.

”We are not stressing out the system like we were,” Couch said. 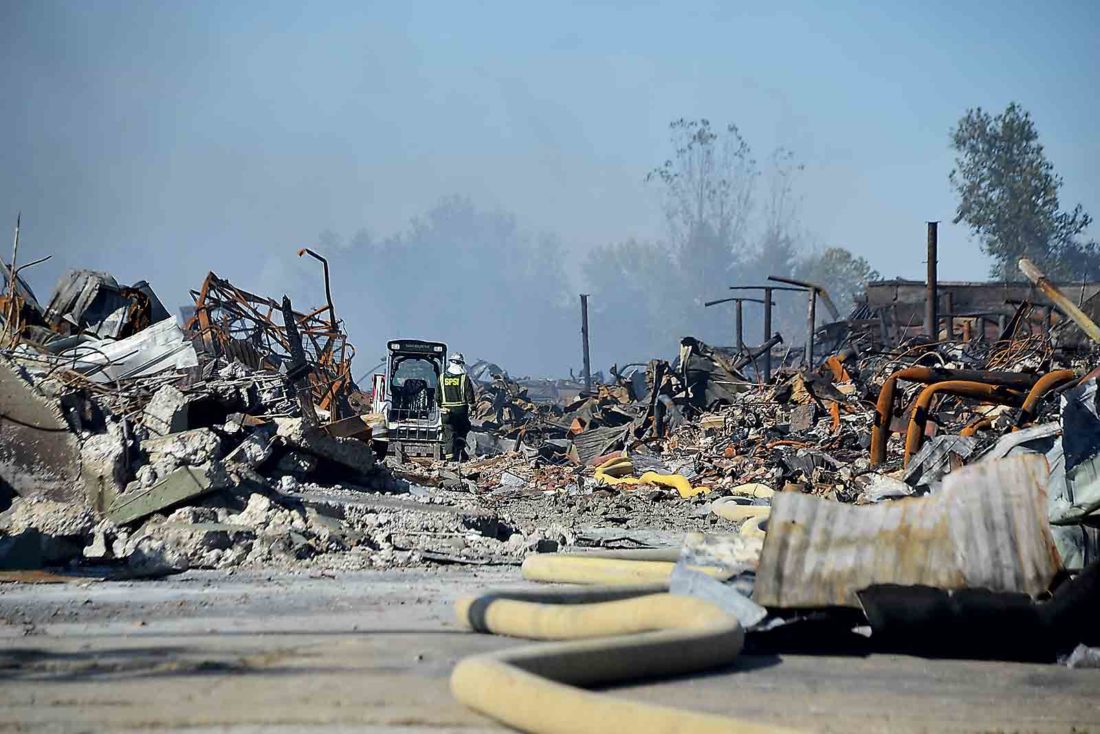 Crews with Specialized Professional Services Inc. continue to work at the site of the fire at the Intercontinental Export-Import Plastics warehouse on Old Camden Avenue. Crews are making progress in getting the fire put out. (Photo by Brett Dunlap)

”For the biggest part, we are about 99 percent off of city water,” he said. ”Once in a while they will tap into a small amount from the city.”

Ladder trucks are needed as crews are trying to get farther in on the site. The ladder trucks provide that overhead reach to take care of spots to allow the heavy equipment to be able to advance on the site.

When a possible concern comes up about something may be on site, work is stopped and testing is done to make sure it is safe to continue.

At one point, officials with the Center for Toxicology and Environmental Health, L.L.C. (CTEH) tested for methyl bromide on the site.

”It was not detected,” said Paul Nony, toxicologist with CTEH. ”At this point, it is not an issue for the workers.”

Due to the age of the building, many people were worried about asbestos fibers getting into the air and impacting people’s health.

”I wouldn’t expect there to be asbestos fibers in the air for the activities going on right now,” Nony said.

He expects that will become more of a concern when people are able to get in there and clean up the site, once the fire is out. Samples will be collected and tested to be able to protect workers who will be on the site then.

Air monitors will be put up around the perimeter of the site to confirm asbestos was not in the air, Nony said.

CTEH has had over 20 monitoring sites set up in the area checking air quality in relation to the fire. Those sites are changed daily with the flow of the winds, officials said. There are monitors that are not moved and regularly checked as well.

People have been requesting documents being produced by CTEH, Couch said. County officials posted those onto the county’s website at woodcountywv.com.

”We want to make that available for residents to be able to review,” Couch said.

Although officials still do not have a complete list of what was stored at the facility, Nony said many plastics share the same characteristics.

”Many plastics are going to burn into the same compounds,” he said. ”We know what those are. We are going on the best information we have from the site, but we are also going on experience on what we expect to find from fires we have dealt with in the past.”

CTEH is planning to stay on the scene until the situation is resolved.

The SirNaik Inc. group of companies paid all of their fire fees owed to the county, totaling $20,000, on Monday this week, two days after the fire started, officials said. The fees cover the site of the fire as well as other properties they have in the area.

”Bunker gear is supposed to be changed every five years,” he said. ”Some had been using gear over 12 years old.”

Commissioner Bob Tebay said the county is learning lessons from this fire, like the city’s water supply is not adequate to handle such a fire by itself.

”Using river water has been very important,” he said.

Tebay suggested the county look into buying surplus water pumps that could be utilized in the river if another large fire would break out.

Organizations have been monitoring the water in the rivers. People with wells are asking for testing to be done at some point.

Plastics were stored in the building, but officials still do not have a detailed account of items which may have been burning up in the fire. Emails and other information are being reviewed to determine what was there.

County officials have been thankful to Gov. Jim Justice’s office for providing assistance in fighting this fire, to be able to retain the services of groups like SPSI and CTEH to effectively fight the fire and do air quality tests.

Nony said they continue to see a decline in smoke particles in the community and those numbers continue to drop as more of the fire is being put out.

”We continue to not see many of the other potentially toxic gases and chemicals that could be in the smoke out in the community,” he said. ”That is a good sign.”