PARKERSBURG, W.Va. — The potential health effects of the towering plume of smoke billowing up from the blaze at the former Ames plant and spreading across the area have been a source of concern for residents since the fire started early Saturday morning.

At a press conference Monday evening at the Wood County 911 Center, Wood County Commission President Blair Couch said the Center for Toxicology and Environmental Health will conduct air sampling and the results of that testing will be shared as soon as they become available, he said.

State and local officials did not have a definitive answer Monday as to the contents of the IEI Plastics warehouse on Old Camden Avenue. Company representatives provided emergency personnel on scene with a book of Material Safety Data Sheets listing characteristics of substances stored there, but it was not known if all of those listed were at the site at the time of the fire.

Company representatives have been working with the West Virginia Fire Marshal’s office and local government agencies.

“I’m sorry. We can’t comment right now,” said Sunny Niak, with IEI, when contacted by phone about the buildings’ contents.

A Salem Township firefighter waits on water to arrive via tanker at the smoldering remains of the former Ames Plant on Old Camden Avenue Monday. (Photo by Jeff Baughan)

“A disaster of this nature is something we have never encountered before. The (fire departments) have the most technical knowledge on a disaster of this sort,” he said. “We provided the MSDS of the things in the building. We will take all responsibility for their insurance companies as the No. 1 priority will be cleaning up the site.”

Lawrence Messina, director of communications for the West Virginia Department of Military Affairs and Public Safety, said no emergency and hazardous chemical inventory forms — supplied to emergency response entities to help plan for and respond to chemical disasters — were filed for the IEI facility.

“My department includes Homeland Security Emergency Management which is the recipient of chemical inventory stockpile reports. We’re not aware of any reporting by this facility to Homeland Security under applicable federal law,” Messina said during a press conference Monday evening at the Wood County 911 Center in Parkersburg.

“We do know that the warehouse manager was able to provide some of what are called material safety data sheets to first responders. That gives us some idea about what’s on site, again, nothing that raises red flags in terms of explicit public health risks. The reason why I think the county and local officials are being cautious is because we don’t have all of the answers yet and that’s why we’re marshalling the resources that we’re bringing to bear at this time,” he said. 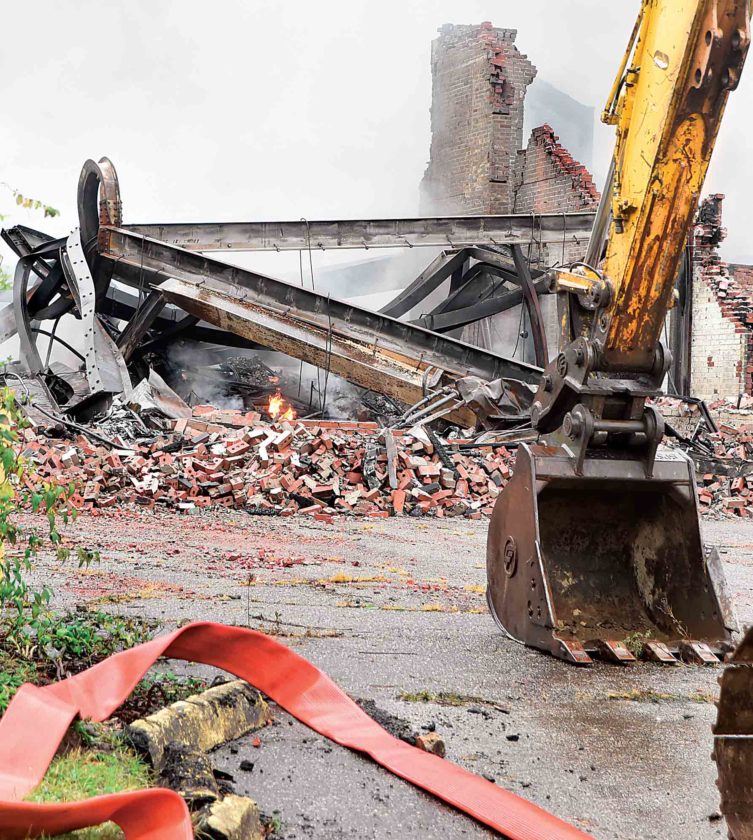 Twisted metal is all that is left of the structures which formed the former Ames Plant, which was destroyed by fire Saturday. (Photo by Jeff Baughan)

Messina said there was some discussion about some prior regulatory action on behalf of the Department of Environmental Protection.

“My understanding is this was a consent order reached with the owner of the property at the time because they were not fulfilling, in the eyes of the DEP, the reporting requirements under the basic pollution permit that they had. I know of nothing that connects that regulatory action with what we are dealing with now,” Messina said at the press conference.

The WVDEP has had dealings with the site’s owners in the past regarding environmental issues. In 2015, the WVDEP issued a consent order regarding IEI’s failure to file discharge monitoring reports dealing with water runoff from the property, said Jake Glance, chief communications officer for the DEP.

“The rest of it was contingent on them filing their DMRs with us, and they never did,” Glance said. 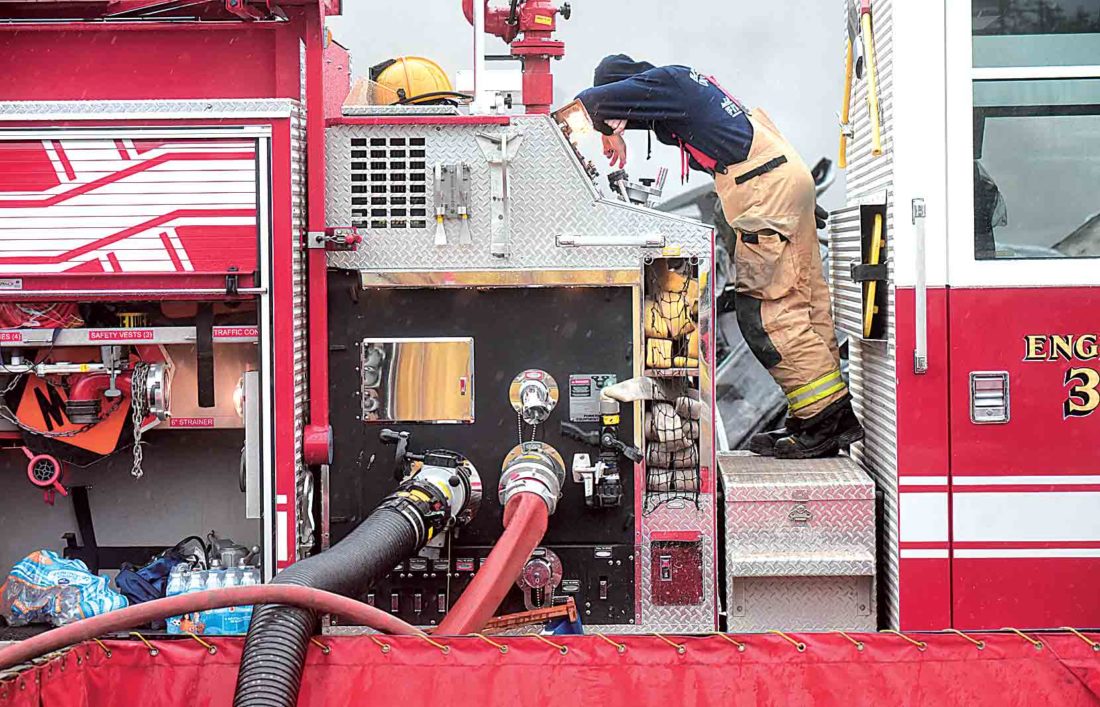 A letter was sent to the company trying to recover the remainder of the penalty, he said.

DuPont Co. was among companies which reportedly sold materials which were stored at the site by the current owners following purchase.

Plant Manger Jay Valvo issued a statement Monday saying DuPont officials are aware of the fire that started early Saturday morning at a warehouse near Parkersburg.

“DuPont does not have any direct affiliation with the warehouse, however, it was storing plastic materials, some of which were purchased from DuPont,”he said.

“Local authorities expect the fire will burn for several days before it can be extinguished. The cause of the fire is unknown,” Valvo said.

The WVDEP and the West Virginia State Fire Marshal’s office have had personnel on scene since Saturday conducting investigations.

“State officials have been meeting (Monday afternoon) with the owners of the property to get some kind of handle on what was actually in these buildings at the time of the fire. I don’t have that information yet. We know that’s a key question for folks and we hope to get that into the hands of people,” Messina said, adding he hoped to have it available in time for another press conference planned at 11:30 a.m. today at the Judge Black Annex.

“There are no specific public safety risks that we’re aware of. It’s what we don’t know that is leading to this sense of precaution,” Messina said.

Elsewhere in the Mid-Ohio Valley on Monday, the Ohio Environmental Protection Agency dispatched an on-scene coordinator to Washington County to monitor air conditions, said James Lee, spokesman for the agency. He said the agency had gotten some data from West Virginia, closer to the site of the fire.

Based on that, “we do not have any reasons to suspect toxics in the air coming over to Washington County,” Lee said, but added that testing would be conducted “out of an abundance of caution.”

IEI also offers services such as grinding/shredding, blending, drying/bailing, customized sustainability programs, and product lifecycle and development. According to the website, IEI is also “able to produce materials custom catered to your injection-molding needs.”

The website does not specify at which IEI locations certain materials are stored.

Regardless of the potential toxicity of specific materials, “particulates, especially fine particulates can be dangerous in and of themselves, or as vehicles for transmission of other chemicals and byproducts,” said Eric Fitch, associate professor and director of environmental science at Marietta College.

Based on the list of products on the company website, Fitch said “we are dealing with longchain polymers for the most part, it sounds like,” some of which could melt or vaporize into volatile organic compounds, or VOCs.

VOCs can be a range of chemicals, many of which can be biologically active, Fitch said. Some, like benzene, are known human carcinogens.

Some materials in the fire and smoke could react with sunlight to create photochemical smog. An active ingredient in smog is ozone, which, if inhaled in high enough concentrations it can scar lung and corneal eye tissue, Fitch said.

“Now if there’s one thing we’re lucking out about right now, the weather front coming in is cutting out the sunlight and washing a lot of these particulates out of the atmosphere,” he said. “Hopefully with the weather coming, we’ve dodged the worst potential for ozone generation.”

If the wind shifts it to drive the smoke through local neighborhoods, people are advised to stay out of the ambient air and minimize exposure, Fitch said.

Once the fire is extinguished, “they’ll have to characterize it (what is left at the site) and clean it up. This is not going to be a quick, easy or inexpensive process,” he said.

Unlike the exposure to the chemical C8, used for decades in the Teflon-manufacturing process at the Washington Works plant, this is an acute event, not a chronic situation, Fitch said.

“Those (chronic exposures) are generally more dangerous, specifically in terms of people getting cancer, than the situation we are likely in now,” he said. “Acute exposures, more often than not, if they’re going to make you sick, they make you sick now.”

Local emergency departments have reported some patients coming in with respiratory issues believed to be linked to the smoke.

“Our Belpre Emergency Department is seeing a small influx of patients with respiratory complaints such as headache, shortness of breath, (feeling) dizzy,” said Jennifer Offenberger, associate vice president of marketing and public affairs for the Memorial Health System.

Those who don’t need to be out in the air are encouraged to stay inside, especially people with health and respiratory issues, she said.

Susan Abdella, director of emergency services at Camden Clark Medical Center, said only a few patients from the area near the fire have come in with symptoms.

“They are being evaluated and discharged with instructions to shelter in place, keep windows closed and stay hydrated,” she said. “The biggest complaints are burning throat, coughing and shortness of breath. We are giving them masks for protection.”

“There is a potential we might go on standby for 24 hours if no one comes to use the shelter,” she said.