The regional bureau of The Associated Press, shares 10 things you need to know Monday, Aug. 14, 2017. Look for full stories on these late-breaking news items and much more in West Virginia newspapers.

1. WHO UNITED AGAINST WHITE NATIONALISTS

2. WHAT TRUMP IS BEING CALLED TO DO

Bipartisan pressure is mounting for the Republican to explicitly condemn white supremacists and hate groups involved in deadly, race-fueled clashes in Charlottesville.

An AP team takes a monthlong, 6,200-mile journey through the Northwest Passage to document global warming on the environment, people and animals.

More than half a million Syrian refugee children of school age are not enrolled in school or informal education in host countries Jordan, Lebanon, Turkey, Egypt and Iraq.

The U.S. secretary of state earns praise for his temperament, yet he’s also stoked doubts about his leadership among many U.S. diplomats and the foreign policy establishment.

The president is poised to seek a trade investigation of China for the alleged theft of American technology and intellectual property.

Suspected Islamic extremists open fire at a Turkish restaurant popular with foreigners in the capital of Ouagadougou, killing at least 18 people.

8. A SOLAR ECLIPSE, A CENTURY IN THE MAKING

NASA and others will monitor next week’s eclipse with an armada of satellites, airplanes, balloons and citizen-scientists looking up from the ground.

9. HOW AMERICANS FEEL ABOUT WORKPLACE

Nearly one in five workers find it grueling, stressful and surprisingly hostile, an in-depth survey finds.

10. FROM A GOLFING FAMILY RISES A MAJOR CHAMPION

The son and grandson of golf professionals, Justin Thomas couldn’t think of a better major to win than the PGA Championship.

From The Journal of Martinsburg, W.Va.: Regardless of your political leanings, if you are a reasonably thoughtful, educated…
byDon Smith 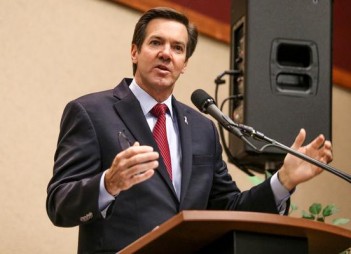