ELKINS, W.Va. — After another brutal winter in Central West Virginia, progress again is being made on the Corridor H construction project.

Robbie Morris, president of the Corridor H Authority, said construction has resumed on a 7-mile section of the roadway near Davis.

“Work has started again,” Morris said. “There still are some weather and temperature issues, but they are back on track. They anticipate that section being completed by the end of July. The eastbound lane is basically done, and they are now working on the westbound lanes at the moment.”

“The use of public-private partnerships is how this section is being funded,” Morris added. “That is helpful, especially in a market of strained public funds.”

Morris also said he expects a section of the Kerens to Parsons project to be let later this year, noting that the overall 14-plus mile portion is being done in three phases: a 7-miles portion, a 3-plus mile segment and a 4-plus mile piece.

When completed, the roadway will go past Parsons to the Mackeyville Road area of Tucker County.

West Virginia Department of Highways officials and engineers are in the process of purchasing the rights of way and planning out the next phase, which could get underway late this year or in early 2017.

Overall, more than 80 percent of Corridor H is either complete or under construction, with the Corridor H Authority pushing to get the highway finished by 2020.

Once complete, the roadway will stretch from Weston and run all the way to the Virginia border, where it will travel an additional 13 miles to the Interstate 81 junction near the Interstate 66 byway to Front Royal, Virginia.

According to the Corridor H – A 2020 Vision website, “Billions of dollars of exported goods from West Virginia will (then) have direct access to the large inland port at Front Royal, Virginia, where double-stacked container rail can then take the goods to the deepest port on the Eastern Seaboard at Norfolk, Virginia. This will be eastern West Virginia’s only direct access to a global port.”

Morris said urgency is key in completing this all-important project.

“Studies show that this will not happen overnight,” Morris added. “These types of projects take an 8-year ramp-up period until you start to see the true economic benefit. It’s about changing patterns, recruiting businesses and educating people. It will take some time. That’s why we need to get it done sooner, rather than later and focus on the economic development along the road and beyond.”

“I’ve been working on Corridor H actively since 1988, and I think prosperity has always followed transportation,” Hartman said. “No matter whether its a river or an airport or highways, I think transportation is absolutely important to industrial development, particularly in our area.”

“It’s been a slow process,” Hartman added. “There have been lots of obstacles along the way, and its become tremendously expensive over the past 25 or 30 years that we have been fighting for this. In the Moorefield area, though, the difference it has made is absolutely amazing. It certainly will be good for the whole area when it is finished.”

Despite much progress, Hartman said challenges are ahead.

“The segment from Parsons to Davis has not been designed and all the environmental work has not been done,” he said. “It’s been a long, hard battle. I think going to 2020 or 2025 to finish would be great, but we just have to continue and get done one segment at a time.”

Challenges aside, Morris said the ultimate goal is to get the roadway finished as soon as possible.

“I can’t hardly go anywhere in the state without people asking about Corridor H and it needing to be finished,” Morris said. “I can’t agree more. It would be very beneficial (for people) to remind our elected officials at the state and federal levels and those at the Department of Highways that this project needs to be finished sooner, rather than later.”

“It’s challenging economic times in West Virginia,” Morris added. “Historically, major investment in times like this have brought about economic revitalization throughout the country, and completing this great project will certainly help our community and our state.” 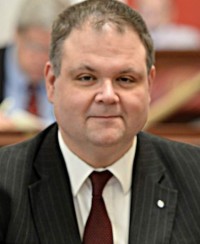 CHARLESTON, W.Va. — A Mingo County mother put fecal matter into her 9-year-old son’s IV while he was…
byBrian Canterbury