3 minute read
Parkersburg News and Sentinel photo by Jess Mancini Jeff Grant of the Kirby Monument Co. Thursday morning hoses away the dust after engraving the dates of death for Sisters Mary Goretti and Mary Thomasina at the monument for the Sisters of the Poor Child Jesus at Mount Carmel Cemetery at Fairview Avenue and 23rd Street.
Total
0
Shares
0
0
0

PARKERSBURG, W.Va. — The date of death of the last two U.S. members of the Sisters of the Poor Child Jesus was engraved Thursday into their grave stones and into the monument at Mount Carmel Cemetery.

Sister Mary Goretti died on Aug. 29, 2014, and Sister Mary Thomasina died on Jan. 9, 2016. The dates of passing were engraved by Kirby Monument Co. of Parkersburg.

The order was founded in Aachen, Germany, in 1844. Seven of its sisters came to the United States in 1923 to serve in West Virginia at the request of Wheeling Bishop John Swint.

Nuns in the order, dedicated to educating poor children, in Parkersburg resided at St. Raphael’s Convent and moved into the convent in July 1924. The sisters taught in the parochial schools in Parkersburg.

The convent was located at 508 13th St., the site of the first City Hospital.

In 1949, St. Raphael’s Convent became the provincial motherhouse of the Sisters of the Poor Child Jesus with the approval of Pope Pius XII.

The original location of the convent is the site of the present-day Greenbrier Apartments, said Roger Nedeff, historian at Saint Francis Xavier Catholic Church in downtown Parkersburg. The convent was demolished in 1962 to make way for the apartments, he said.

The sisters and the convent were moved to a residence next to Parkersburg Catholic High School, then across the street to a residence where kindergarten classes were held, Nedeff said.

The decision to close the convent was made in 1994 after the death of Sister Nicomeda on Sept. 6, 1994, Nedeff said. The remaining two nuns relocated to Columbus, he said.

The statue of the Sisters of the Poor Child Jesus at Mount Carmel was commissioned in 2006 and the design approved in 2007 by Sister Anna Veronica.

It is made of gray granite and carved in China, according to Kirby Monument. The pedestal and base were completed by the Eagle Granite Co. of Elberton, Ga.

The angel, standing with a child holding a fish, is 5-foot high. It stands on a 3-foot square pedestal where the names of the nuns in the order are engraved.

Bosley Crane Rental lifted the three components of the monument into place.

Sister Goretti was born in Liverpool, England, in 1919 and joined the order in 1952 at St. Raphael’s and she taught kindergarten and pre-kindergarten. Sister Thomasina, born in 1927 in Wheeling, taught for 58 years and started at the St. Francis Xavier School in Parkersburg.

They and the other nuns of the order are buried at Mount Carmel. The first sister in the order in America, Sister Mary Chantal, is buried there.

The Associated Press shares the 10 things you need to know Nov. 13

CHARLESTON, W.Va. — When the Ringling Bros. and Barnum & Bailey Circus make its annual stop at the Charleston…
byBrian Canterbury 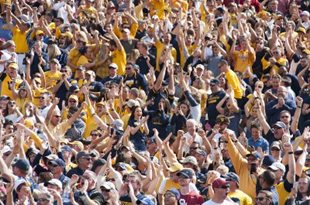 WVU sells a third of its tickets for bowl game

MORGANTOWN, W.Va. — WVU has sold about a third of its tickets and officials expect a small —…
byBrian Canterbury