VIENNA, W.Va. — Honoring the families who have lost a family member in service of their country was the focus for the dedication of a special memorial Sunday in Vienna.

Over 300 people gathered at the new Spencer’s Landing Park along River Road in Vienna for the dedication of the new Gold Star Families Memorial.

The special memorial was placed to honor the families who have lost family members in war.

Shirley White, founding member of West Virginia Gold Star Mothers, said there were many people who have worked over the last few months to make sure the memorial was placed in Spencer’s Landing Park. White had lost two of her children in service to this country.

“They worked tirelessly to make this happen,” White said of the Vienna project.

The memorial project was the idea of Hershel Woodrow “Woody” Williams, a retired United States Marine from West Virginia, who received the Medal of Honor for his actions in the Battle of Iwo Jima during World War II. Williams has the goal of getting at least one Gold Star Families monument in every state.

The original monument was established in 2013 at the Donel C. Kinnard Memorial State Veterans Cemetery in Dunbar, W.Va., which White attended.

“Since that time Woody and his foundation has made it a priority to pull the leaders from the different communities to make this happen all over the United States,” she said. “We are so thankful for that.”

Each monument allows people throughout a community to learn about the sacrifices made on behalf of the average citizen, White said.

“It is much more than educating and honoring, it is also a reflection,” she said. “Having these memorials gives us a place to come if we so desire.

“It is not just West Virginians, but anyone who may be traveling through. It is a place where Gold Star Families can go and reflect, to think about their children.”

“Any time you have a chance, ask a Gold Star Family about their son, their daughter, a brother or sister,” White said. “These are sacrifices that were made by the whole family for all of our citizens.”

A number of organizations gathered for Sunday’s dedication. The Patriot Guard Riders came and stood at attention with American flags; the Marine Corps League posted the colors; the American Legion did a rifle salute; Carlin’s Battery D shot its two Civil War-era cannons; the Greenmont Elementary School Choir sang; and others participated in the ceremony.

Greg Smith, retired Lt. Colonel of the U.S. Air Force, said these veterans distinguished themselves in their service then returned home and made lasting contributions to their local community.

“When you see all of these men who served their country and then came back and served their community, then you really know what it is like to be a veteran,” Smith said.

Williams spoke about the sacrifices families make, especially when one member dies in the service of their country.

“This is not about me, it is about them,” he said as he gestured to a number of Gold Star Families in attendance. “We are here because of them and their sacrifice.”

Williams was honored by the turnout from the community.

“What a thrill to see this many Americans who believe in and love their country,” he said. “Your presence here speaks louder than words.

“It says you are an American in the truest sense. Your presence here says to those who have lost a loved one for our freedom while serving the greatest country on Earth that they are the true heroes of America. It also says they will not be forgotten.”

Williams said the military is made up of people who volunteered to be there.

“This country could not exist if they were not there,” he said. “The loss of a loved one brings the same grief, heart ache and requires us as Americans to remember.”

The memorial is a monument to the families who have sacrificed.

“We hope in some way it will ease the pain,” Williams said. “It will serve as a reminder to all of us, and particularly our youth, of America, this community and their sacrifices and yet give some assurances that this community does remember those loved ones who will not be forgotten.”

It is the community that made erecting the monument possible, he said.

Memorials honoring veterans who died are all over the nation’s capital in Washington, D.C., but there is not one that pays tribute to the Gold Star Families “who gave so we could be free,” Williams said.

“It is something that is long overdue across this country,” he said. “Let us all remember what freedom really costs.

“Never forget the loved ones that many of us have lost.”

See more from the Parkersburg News and Sentinel. 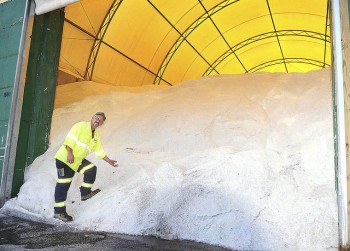 Salt prices up, winter weather could be bad

COLUMBUS – After three weeks of testimony, a federal court jury returned a verdict Wednesday against DuPont in…
byBrian Canterbury