FAIRMONT, W.Va. — For the 11th year in a row, Fairmont State University’s American Society of Civil Engineers Student Chapter will represent the region at the National Concrete Canoe Competition.

The 27th annual National Concrete Canoe Competition is set for June 19-21 at the University of Pittsburgh at Johnstown, Pa. Fairmont is the only university in West Virginia to be invited to compete at the national level.

To qualify for nationals, the chapter won first place in the recent 2014 Virginias Conference Concrete Canoe Competition hosted by the University of Virginia.

Ashley Marinaro of Clarksburg is Fairmont’s team captain. She said the team is excited to again head to the national competition.

“It’s a pretty big accomplishment for a school of our size. Even just at the regional level we compete against schools five times the size of ours,” she said. “I feel pretty good about this year. I think we’ll do better than we’ve ever done.”

Being part of the national competition has made a positive impact on the team, Marinaro said.

“I’ve traveled all over the country with the team. We’ve made friends who come from all over the world. And, it definitely opens the door for employment and internship opportunities,” she said.

The national competition is a unique experience and was intimidating at first, Marinaro said.

“I thought we would be going up against large schools and students who would know more. But over the years my perspective has changed,” she said. “It’s more competitive at the national level, but other teams are open to share ideas. And we’re definitely competitive.”

At the regional level, the Fairmont team received the 2014 Distinguished Chapter Award for Region 4. The award is presented each year to the most outstanding student organization in the region.

The Fairmont chapter also was a Robert Ridgway Award finalist. This distinction was earned by only four of 304 student chapters.

Tia Como is the faculty adviser for the Fairmont team. She said winning the 2014 Distinguished Chapter Award for the region and being named a Robert Ridgway Award Finalist are major honors.

“Our students work extremely hard to create a concrete canoe of the proper consistency and dimensions to actually float and race on the water. I am so very proud of our chapter and students,” Como said.

In the canoe competition, the students must follow strict rules that dictate how a concrete canoe can be built. And, of course, the vessel must float to be eligible to compete in the races, she said.

The “Gray Ghost” canoe is 19.5 feet long, with a width of 32 inches, depth of 14 inches and half an inch thickness. The unit weight of the concrete is 52.1 pounds per square foot and the overall weight is 205 pounds… 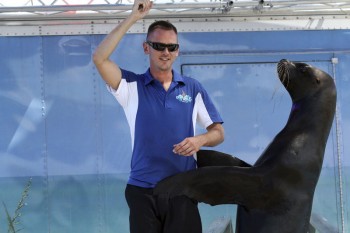 FAIRLEA, W.Va. — It can be difficult to find a seat at one of the State Fair of…
byBrian Canterbury

CLARKSBURG, W.Va. — A planned restoration of the former Robinson Grand Theater would cost taxpayers about $365,400 a…
byBrian Canterbury