PARKERSBURG, W.Va.  — Documents provided by the owners of IEI Plastics to the state were not sufficient enough to meet what was asked for in the state’s Order for Compliance, officials said.

In an update provided by the West Virginia Department of Military Affairs and Public Safety, IEI provided documents Sunday and again on Monday in response to the Order for Compliance.

The update said the owners were in town on Monday to present the documents. Monday’s records were submitted during an in-person meeting among the local, county and state officials involved in the response and the principal owner of IEI and his representatives.

WV DEP said it has concluded that these records do not sufficiently satisfy the Order for Compliance, and specifically its directive requiring detailed inventory of all materials that were burned at the site.

Local and state officials issued an update Tuesday evening regarding continuing efforts in regard to the IEI Plastics warehouse fire on Camden Avenue in Parkersburg. 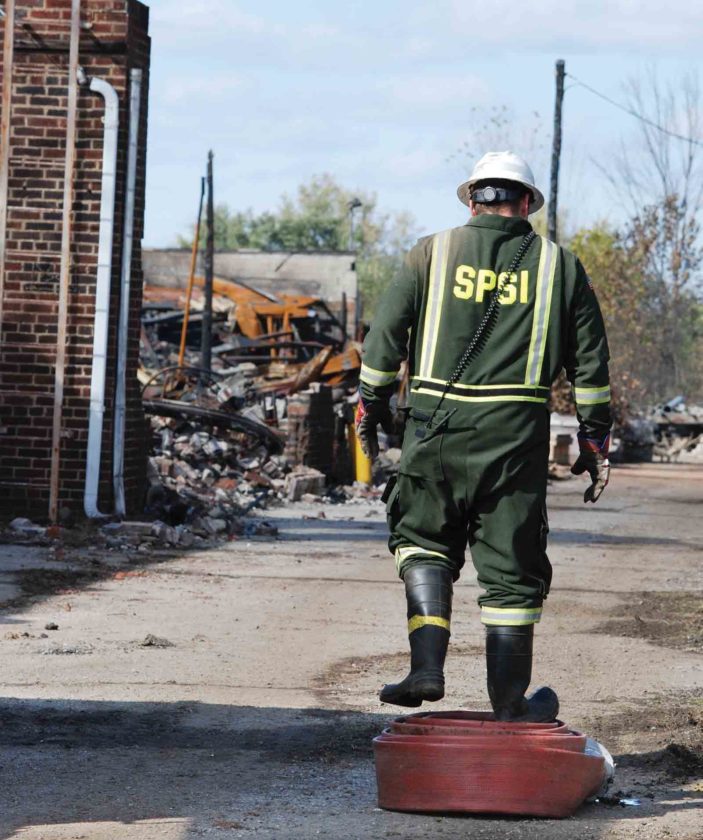 A worker from Specialized Professional Services Inc. of Washington, Pa., rolls up one of the large fire hoses that the company used while fighting the fire at the former Ames plant in Wood County. The company was busy Tuesday packing up its equipment. (Photo by Art Smith)

The update was issued on behalf of Incident Command and the Joint Information Center by Lawrence Messina, director of communications for the West Virginia Department of Military Affairs and Public Safety, and is in regard to questions regarding ongoing efforts at the site as well as other questions raised about operations and what was being stored at the site.

Officials ended a cool down period at noon Tuesday and the property was turned over to the owners to be secured.

The update includes the following information:

* The cool down period concluded at noon Tuesday without any signs of flare-ups or other incidents; the cool-down was extended to the full 48 hours to ensure a comprehensive monitoring of the site;

* As a result, Specialized Professional Services Inc. (SPSI) has concluded the work it has conducted for Wood County officials;

* As of Tuesday morning, the principal owner of the site had not indicated that SPSI would be retained to assist with the mandated site cleanup and debris removal;

* The investigation by the State Fire Marshal (SFM) remains ongoing and will not be affected by turning over the property to the owner;

* Similarly, the owner must still comply with the Oct. 26 Order for Compliance from the W.Va. Department of Environmental Protection (WV DEP); it specifically requires an approved Plan of Corrective Action that includes proof of proper disposal of burned material;

* The Homeland Security and Emergency Response (HS-ER) section of WV DEP conducted air monitoring through Monday morning, and will post those results as it has for all previous monitoring;

* The local, county and state officials involved in the response recognize that the public has legitimate and understandable questions regarding the contents of the site (nature and quantity) at the time of the fire;

* Mindful of the speculation spurred by inaccurate and incomplete information, Incident Command can release the detailed inventory or the warehouse’s contents once IEI provides a list that meets the requirement stated in the Order for Compliance;

* As there are ongoing investigations, Incident Command will release accurate and sufficiently complete information in coordination with the Wood County Prosecuting Attorney’s Office;

* Water test results continue to be received by the W.Va. Dept. of Health and Human Resources (DHHR), the Ohio River Valley Water Sanitation Commission (ORSANCO), the W.Va. American Water Co., OhioEPA and Cincinnati Water. The Ohio River results are encouraging that downstream water systems will not be impacted by the fire.

* As reported to some media on Monday, the U.S. Centers for Disease Control and Prevention (CDC) contacted Wood County officials at the request of US EPA to offer assistance. Local, county and state officials will now coordinate to make the most of this offer;

* As reported to media on Monday, the State Fire Marshal’s Office inspected an IEI-affiliated property on Thursday and three more on Friday;

* As indicated by the Incident Commander, Lubeck Fire Chief Mark Stewart, at least one of those inspections revealed potential fire code violations. However, the State Fire Marshal will release final results from these inspections only when they are completed and assessed;

* The State Fire Marshal’s Office stresses that these inspections have so far yielded no signs of imminent danger;

* The State Fire Marshal’s Office is scheduling inspections for the remaining IEI-associated properties;

* The U.S. Environmental Protection Agency (US EPA) plans to collect ash samples from the site, with permission from the property owner;

* US EPA will also assist the fire department in evaluating the fire-fighting equipment used during the response;

* US EPA will continue to coordinate with local and state public health officials as well as the federal Agency for Toxic Substances and Disease Registry (ATSDR) to provide public health-related information.