CHARLESTON, W.Va. — In about a month, Thomas Health plans to begin charging upfront co-pays to patients who show up at Thomas Memorial Hospital emergency room for non-emergency reasons.

Starting Thursday, staff at the South Charleston hospital will begin informing patients of the change and informing them of other options for non-urgent care, according to hospital administration.

Dan Lauffer, president and CEO of Thomas Health System, said that patients who would be better served at a walk-in clinic or doctor’s office lengthen ER wait times and are less likely to receive the care they need at the emergency room.

The patients, and their insurance providers, also end up paying more for services, because doctors may order unneeded tests, Lauffer said.

“We don’t have the same doctor always in the emergency room,” he said. “We’re really not keeping a true medical record like you would in a doctor’s office. We’re just basing our delivery of care off of the acute episode.

“The emergency room can be a very costly place to receive care, because if you’re not being seen by the same physician all the time, every time you present the doctor’s got to start from scratch.”

Lauffer said the company will begin charging the upfront co-pays in about a month. Patients will be screened to determine whether they meet emergency room criteria. Non-emergency patients can stay and pay an upfront co-pay, or visit another provider, such as a Thomas Health care clinic. Paige Johnson, hospital spokeswoman, noted that a care clinic is just steps from the Thomas Memorial ER and shares a waiting area.

Kaiser Health News and the Washington Post reported in 2012 that more hospitals were charging upfront ER fees. They reported that in the previous year, about 80,000 patients left hospitals owned by HCA, the nation’s largest for-profit hospital chain, after being told they would be charged $150 upfront to be seen in the emergency room. Hospital officials said the fees were in response to mounting bad debt incurred by the uninsured and underinsured, while consumer advocates worried some patients wouldn’t seek care.

About 30 percent of West Virginians are covered by Medicaid, which requires only an $8 co-pay per quarter, Lauffer said.

He said the high prevalence of Medicaid patients in the area has contributed to the number of non-emergency ER visits “to a great degree,” but he also observed that patients on other insurance plans often present to the ER for non-urgent reasons as well.

He noted that hospitals have historically advertised emergency rooms as access points to the hospital.

“We want to change the culture of the health care delivery system,” he said.

He also noted that in recent years the industry has shifted focus from “fee for service” to delivering care “based on outcomes.”

“The change has occurred on the reimbursement side, but not the culture side,” he said.

Asked about whether Charleston Area Medical Center has a problem with non-emergency ER visits, CEO Dave Ramsey said that the problem is “not significant” and that “the people that come frequently to the emergency room tend to have other underlying issues… and they tend to be mental health issues.”

Lauffer said that Thomas Memorial ER staff ask screening questions about whether the patient plans to harm themselves or others, and can make behavioral health referrals.

“I must admit this is a difficult issue because you’re also having behavioral health issues intertwined with the substance abuse problem,” he said, noting that overdoses are also taking up ER time and resources.

“I don’t think the problems we’re talking about are going away anytime soon,” he said.

From The Intelligencer of Wheeling: For years, many West Virginians have complained about the sorry condition of many…
byDon Smith

Media Advisory: Intuit leader Brad Smith to give public lecture on education and entrepreneurship at WVU 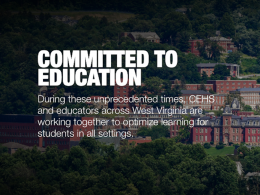