WHEELING, W.Va. — One day after a major primary win in Wisconsin, Republican presidential hopeful Ted Cruz arrived in Wheeling on Wednesday night for a private fundraiser.

Robert E. Murray, chairman, president and CEO of Murray Energy, hosted the event for the Texas senator at Wheeling Park’s White Palace – though Murray emphasized he is not yet endorsing Cruz.

The private event was closed to the media. About 600 people were expected to attend the event.

“This is a personal fundraiser organized by Mr. Murray, and Murray Energy Corp. has nothing to do with it and any comment on it,” Gary Broadbent, spokesman for Murray Energy, said in a prepared statement. “Mr. Robert E. Murray has not, as yet, formally endorsed any Presidential candidate. He has, however, supported two of them, including Sen. Cruz.

“Indeed, Sen. Cruz has done more, and committed to do much more, than any other presidential candidate to support the U.S. coal industry and the lives and livelihoods that depend on it.”

Broadbent did not identify the second presidential candidate Murray has supported, but businessman Donald Trump and Ohio Gov. John Kasich remain as Cruz’s opponents for the GOP presidential nomination in 2016.

Cruz’s motorcade made its way from the Wheeling-Ohio County Airport to the White Palace, where it entered the back entrance of the building – outside the view of media and cameras – at about 5 p.m.

Many of the hundreds in line outside the venue had specific reasons for supporting Cruz. Charlotte McConlogue of Elm Grove is retired after 40 years of teaching, and she appreciates Cruz’s policies on education.

“I am a raving Republican,” she said. “I support all the Republican candidates. Whoever gets it, I will support them.

“But I heard Sen. Cruz make the statement, ‘Education is the pathway to American Dream.’ I agree with that.”

David Jones of Flushing, vice chairman of the Belmont County GOP, said he supports Cruz because he “is one of the few” candidates who supports the coal industry.

“He is also a Christian,” Jones said. “He is honest and trustworthy, and he acts presidential.”

Earlier this election year, former Ohio County GOP Chairwoman Elgine McArdle announced her support for candidate Carly Fiorina, who has since suspended her presidential campaign and thrown her support behind Cruz. McArdle said Thursday she agreed with Fiorina’s endorsement of the Texas senator.

“I believe he is the true conservative,” McArdle said. “Donald Trump scares me. Ted Cruz doesn’t scare me.

“He is consistent in his voting record and has always been a conservative. He is not a flip-flop fish.”

Marshall County Commissioner Bob Miller has filed to run as a statewide uncommitted delegate to the Republican National Convention, set for July 18-21 in Cleveland. West Virginia will be sending a total of 30 delegates to the convention.

“I am leaning toward Ted and Gov. (John) Kasich,” Miller said. “I agree and disagree with some of the things both of them say.

“I like Trump, but those are the men to lead the party. In a perfect world, they would be on the same ticket.”

West Virginia University student Blake Humphrey of Wheeling said he is undecided about the presidential race and wants to get the perspective of all the candidates.

“I’m open to every candidate on the GOP ticket,” he said. “I’ve heard John Kasich speak, and now Ted Cruz. And maybe I will get to hear Donald Trump if he comes to West Virginia.” 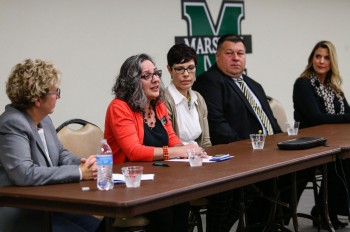 Worst form of black lung is roaring back