4 minute read
Journal photo by John McVey Family and friends gather on the square in downtown Martinsburg to protest a new MPD canine policy that would reassign the department’s police dog to another handler.
Total
0
Shares
0
0
0

MARTINSBURG, W.Va. — Family and friends had to console a sobbing Melonie Phelps on Monday as she led a rally on the square in downtown Martinsburg for her husband, Martinsburg Police Sgt. Craig Phelps, to keep Argos, the department’s canine drug dog.

“The thought of Argos not being with us is devastating,” Melonie Phelps said, overcome with emotion. “It’s unbearable not knowing who he’s going to be with. He’s part of the family. Dogs have feelings. They can be anxious, depressed, angry. We’re the only family he knows. Imagine being ripped out of your family. We’re the voice for Argos. He doesn’t have a voice. We’re interested in what is best for his interest.”

The news sparked a firestorm on social media Friday.

Melonie Phelps recorded a tearful video that was posted on YouTube, drawing several tens of thousands of views across the globe, and the police department’s Facebook page filled up with mostly negative comments.

“Under the new department policy, supervisors will no longer be assigned as canine handlers,” according to the release. “MPD will keep its canine, but the assignment will now only be offered to patrolmen. The policy will become effective on May 1, 2016. In assessing the effectiveness of MPD’s canine program, Richards concluded that a supervisor couldn’t perform both tasks effectively.”

Phelps’ rank of sergeant makes him a supervisor.

“Martinsburg needs excellent police supervisors and an excellent canine handler – but the same person just can’t do both jobs well,” Richards is quoted as saying in the news release. “We’re fighting one of the worst heroin crises in the country and need to utilize our drug-trained dog as an effective asset, but after almost a year’s work our canine recovered less than one gram of heroin. We need to do better and we will do better.”

Phelps is not mentioned in the news release.

The canine handler position will be offered to MPD officers with the rank of patrolman. The selection of the new canine handler will be made May 1, the officer will immediately begin a two-week training course with the dog and the team will “hit the streets” by mid-May, according to the news release.

A petition to let Phelps keep the dog is being circulated, and an online petition at change.org has been signed by 3,500 people, Kimberlee Kesner-Griffin said Monday. She is a friend of the family and she organized Monday’s rally.

“People say change is good, but maybe you’re not going to get the change you’re looking for,” she said.

She was encouraging passing motorists to honk their horns in support, which several cars and trucks did. She said the West Virginia State Police K9 unit waved as it passed, and the Berkeley County Sheriff’s K9 unit stopped and talked with the group.

Argos is a 6-year-old Belgian Malinois shepherd. It has been with the department for about four years. Phelps has been a canine handler since 2005, previously working with a trained dog named Kardiff, which is deceased. Phelps has been on the force nearly 16 years.

“I want to see Argos retired so he could stay with the family he knows,” Melonie Phelps said Monday.

“He’s in the prime of his career,” Richards said. “We usually retire a dog at the end of his career. He’s a valuable asset.”

Richards was not surprised by the reaction to the news, he said.

“We realize that it is an important issue to people, and there are strong feelings out in the community,” he said. “But it will not affect our policy. This is important for our department and our city. The policy is you can no longer be a supervisor and a canine handler. We have high expectations for both positions and two people have to do those jobs.”

Richards emphasized that the rumors that the MPD is going to eliminate the canine program are completely not true.

“We will have a new canine officer whose duties will be to focus on drug enforcement,” he said. “Supervisors supervise all the officers on their shift, which could be six to eight officers at one time. Supervisors’ goals are to focus on training and guiding their officers. One person can’t do both the supervisor’s job and the canine handler’s job.”

Yet again, Einstein’s theory passes the test with flying colors

Opinions: Thumbs Up, Thumbs down

From the Parkersburg News and Sentinel: UP: To those who bid and voted with donations during the Easter…
byDon Smith

By Bruce Vandal Last week, faculty and staff from West Virginia’s public colleges and universities set forth on a…
byDon Smith 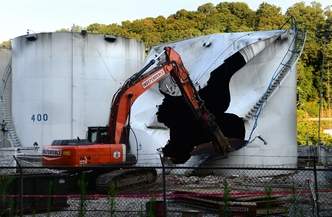