She’s seen the angry, shouting crowds of coal mining supporters who protested her visit to Williamson Monday. Fueled by a comment she made in March about putting coal miners and coal companies “out of business”, the protestors carried Friends of Coal signs and Donald Trump posters.

Clinton’s offending comment was snipped from a larger statement about the eventual future of coal as an industry and her plan to retrain and re-employ coal miners. Clinton has since said she misspoke.

But the damage was done, and Clinton faced hundreds of protestors at her campaign stop at the Williamson Health and Wellness Center, as did former President Bill Clinton Sunday in Logan, also deep in the southern coalfields.

On Tuesday, Clinton got a much warmer welcome in Charleston…

Event, in 13th year, set for Friday and Saturday at the Raleigh County Memorial Airport in Beaver By Michelle…
byDon Smith

PARKERSBURG, W.Va. — Two gargoyles which adorned Parkersburg’s former city hall prior to its demolition are safely at…
byBrian Canterbury 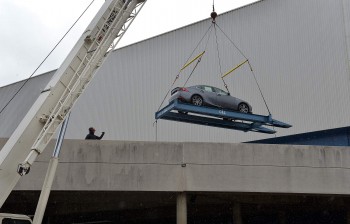