Those are the same locations Kanawha schools officials originally announced as the sites for the portables, which are supposed to house students until a new Hoover High and Clendenin Elementary can be built.

“Next Steps. Putting together some additional information now that the plans have been approved and then going out for bid,” a Kanawha County Schools Facebook post Wednesday read.

The public school system wants FEMA to fund 75 percent — perhaps more, if it’s allowed to — of establishing the portables and of building new schools for the displaced students.

Hoover students are learning in Elkview Middle’s building in the afternoons, while the middle-schoolers attend in the morning. Clendenin Elementary students are sharing Bridge Elementary’s building with its students at the same time.

Kanawha’s Facebook post didn’t state whether the site plan approvals were a guarantee of FEMA funding. Homstad said he wasn’t comfortable talking about funding late Wednesday, but said the announcement of the site plan approvals meant that the school system has “met the criteria for the most cost-efficient option for portables.”

“FEMA does not require the applicant to pursue a specific option for a temporary facility but it will only fund the most cost-effective option,” Homstad wrote in an email.

The Kanawha school board meets at 6 p.m. today on several related issues, plus a public hearing on what next school year’s calender should look like, in the school system’s headquarters at 200 Elizabeth St., on Charleston’s East End.

Wilson has said that FEMA had asked school officials in August to consider alternatives to installing portables because of the projected expense. He has said the school system did consider options that didn’t include portables, but officials weeded those out and planned to present to FEMA six options that all included portables.

There were to be three options for the Hoover students and three options for the Clendenin Elementary students that FEMA could consider for funding. He said both original proposals were among those six options, along with an alternative plan for Hoover students that still would have put the portables at Elkview Middle but placed them in the front parking lot there, rather than on the football field, instead opening the field up for parking.

Wilson said the parking lot portable idea likely had become the preferred option, because the area in front of Elkview Middle is more out of the flood plain, meaning less money would be spent elevating the portables, compared to the perhaps 8 feet the portables would have to be lifted on stilts in other areas of the campus.

One of the agenda items at today’s meeting is a vote on a Comprehensive Educational Facilities Plan amendment, to allow the school system to seek funding approval this year from the state School Building Authority for the replacement of Hoover and Clendenin Elementary.

The SBA distributes state general revenue, bond proceeds and lottery money for school construction and renovation projects on a competitive basis. The agenda doesn’t state how much money Kanawha is seeking from the SBA for the schools, which FEMA could fund the majority of.

The agenda also includes a vote on a contract with Charleston-based ZMM Architects & Engineers for “FEMA compliant portable option study and subsequent design services for selected options,” as well as a vote on paying Harris Brothers Roofing $565,000 to replace a heating, ventilation and air-conditioning system at Bridge Elementary.

To see more from the Charleston Gazette-Mail, click here.

By ANDREA LANNOM The Register-Herald CHARLESTON, W.Va. — A House committee advanced a bill Tuesday that would restructure…
byDon Smith 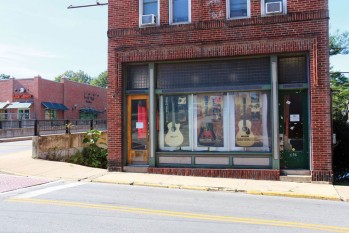 MORGANTOWN, W.Va. — There’s something soothing in the sound of an acoustic guitar. Science mingles with sound each…
byBrian Canterbury