BEVERLY, W.Va.  — Sold on the energy market daily, up to 650 megawatts of electricity generated by two gas and one steam turbine in Beverly join the ranks of hundreds of plants supplying reliable power across the country daily.

“That 650 megawatts of power would power the city of Marietta for a year,”explained Jeff Lawrence, a maintenance worker at the Dynegy energy plant in Beverly. “The only problem is you can’t store it, the product we make is used instantly as we put it out.”

The Dynegy facility in Beverly broke ground in 2001 and opened its doors for business in 2002. It’s one of over 50 owned by the company supplying power to the midwest and part of the northeastern U.S.

“I came from a chemical plant and was here when the plant was built,” said Control Room Operator Steven Anderson. “Those first six months we spent cross training on all of the shift operations so we can cover each aspect of keeping this facility running and we can maintain our supply to the grid 24/7.”

With four rotating shifts and administrative staff, the plant employs 21 locals. Those employees maintain power balance and monitor emissions while communicating with the corporate headquarters in Texas to sell the power generated on a daily market. 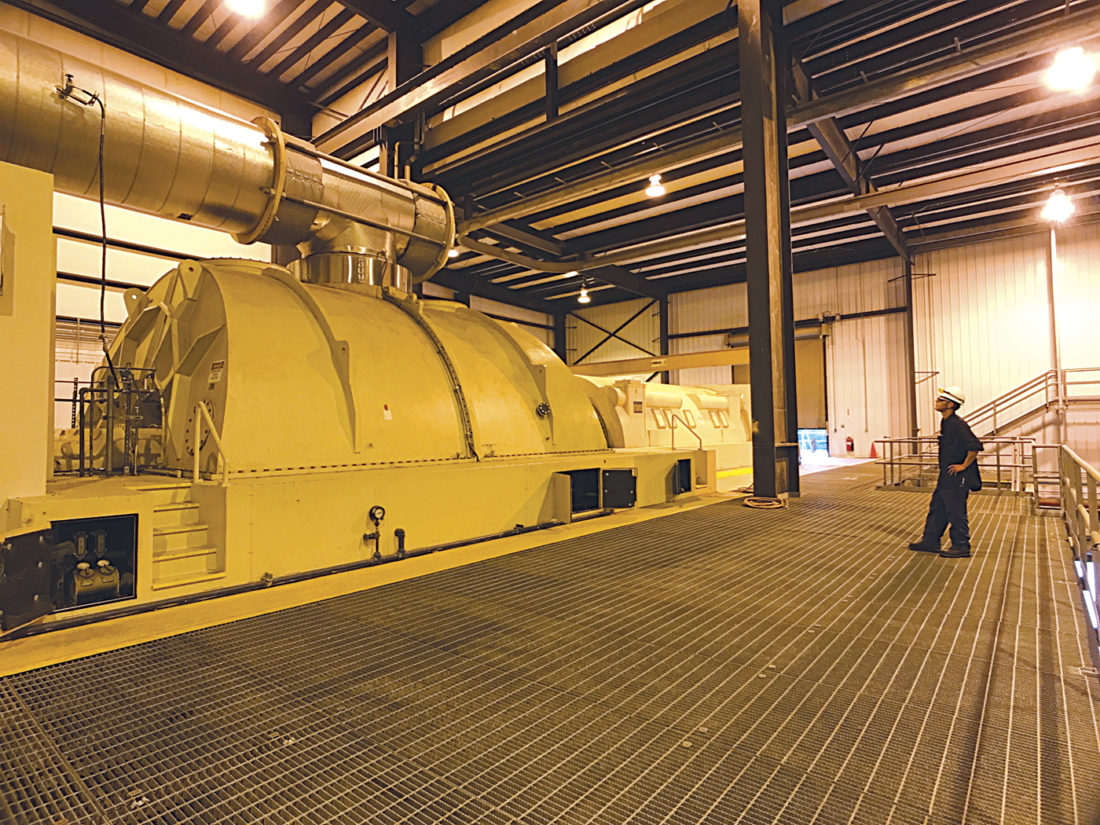 Photo by Janelle Patterson Coleton McCurdy, an outside operator for Dynegy energy plant in Beverly, looks over the “work horse” steam turbine at the plant.

“Basically these type of plants are automated to the point where one person can operate most of the equipment-that’s our control room operator,” said Tim Ansell, plant manager of Dynegy in Beverly. “Everything is centrally operated from one room in the plant and our job here is to make him successful. He’s the focus point of this whole place. If he has a bad day we all have a bad day.”

Without a regulated output guaranteeing daily demand in Ohio, the daily market makes electricity purchases competitive for both aggregation and distributors, Ansell said.

“We’re not guaranteed to run, so it keeps your prices down,” he explained. “The power we sell is bid everyday and that’s part of the reason there’s such a reliable power grid in the U.S., because redundancies and competition are built into energy generation.”

The plant is comprised of two primary gas-fired turbines and one steam turbine that generate voltage boosted and transmitted into an American Electric Power grid 24 hours a day.

First, air is pulled from outside through filters and compressed. Then natural gas is added to create temperatures exceeding 1000 degrees Fahrenheit. As the hot gas expands through each turbine, that expansion spins rotating blades which draw in more air and spin a generator which produces electricity.

“But those gas turbines create exhaust temperatures around 1161 degrees,” said Anderson. “So we capture the heat out of the back of the gas turbines and route it through a boiler which heats water and produces steam and runs our steam turbine.”

“It’s amazingly efficient,” said Coleton McCurdy, an outside operator, as he walked through the processes of the plant Friday.

Even with a break in the heat as rain washed through the hills where the plant is located off of Ohio 83 on Friday, the temperatures still noticeably rose as McCurdy ascended to the platform above the steam turbine.

“Every bit of steam that can be recaptured is used to push through this work horse,” he explained. “It passes through three times at high, mid- and low-pressure to generate as much power as we can get from it before it forms condensate and we use that water again.”

Water is immensely important to the whole process of the plant with 5 to 6 million gallons of water used each day to cool equipment and keep the processes throughout the plant efficient.

McCurdy oversaw water operations on the Dynegy grounds Friday and explained how before any of the water pulled from the Muskingum River ever reaches the pipes to be boiled into steam or rotates through the plant cooling equipment, it must be clarified and all impurities must be removed.

“Water does tricky things when it’s super-heated so you don’t want any metals or minerals at all in the water that’s pushed at high pressures through these pipes because they could build up or even severely damage the whole operation,” he said.

With the old smokestacks of the AEP coal-fired Muskingum River Plant on the horizon across the river in the background of the Dynegy grounds, McCurdy laid out how water first is clarified to remove any color and sediment before it is treated at the plant.

“So when we first bring in the water from the river it comes in cloudy, or even darker after it rains as all that mud is washed down river,” he said. “We treat that water with chemicals that bind to the mud and make it fall and then pack that mud to be removed by Waste Management.”

Then the water, now crystal clear, is treated to remove any other minerals which could damage processes within the plant and stored in water tanks on the plant grounds.

“It’s then dropped through a gravity system for cooling as needed,” he explained, noting the 12,000-ton chilling capacity of the plant is overseen at the back end of the facility’s grounds. “Or it’s pumped to the boilers for the steam turbine use.”

Back inside the control room Anderson monitors the internal computer-guided system controlling each turbine to make sure the need purchased for that day is met and that emissions regulations for both air and water are honored per Ohio Environmental Protection Agency standards.

“Basically my job is to produce power and make sure the plant stays in emissions compliance,” he explained.

“The first peak is when people are getting up, flipping on lights, getting ready for and getting to work,” said the plant manager. “Then it stays low and steady throughout the day with maybe smaller spikes around lunchtime. But then we see our second peak as people are getting home, turning down the air conditioning, turning on the TV and gathering for dinner.”

Seasonally, usage also peaks in the heat of summer and dead of winter.

“We can watch each year as people’s Christmas lights are going up because we see that spike in use as the sun goes down,” he said. “But we never know exactly where our power goes once it leaves the facility, we just meet the demand.”

Anderson further explained that the electricity generated ends up mixed with power from several other plants all across the region and is shot at higher voltages further distances as needed.

“It’s essentially like one big pail of water that we’re all pouring into,” he said. “Then whoever needs it is just scooping some of that out from the big pail.”

“Approximately $25 per megawatt hour covers the our purchase of gas to fire the turbines, cover maintenance and repairs,” explained Ansell. “So we’re spending $10,000 to $13,000 each hour to operate.”

But 45 percent of the plant’s budget goes to taxes, with 71 percent of those covering almost half of the Fort Frye Local School District’s budget each year and the other 29 percent going to the county for road repairs and other social program expenses.

“We ran the numbers and essentially we could cut a check for $936 per person in the school district each year,” said Ansell. “We realize that’s a part of doing business though and are pleased with how (Fort Frye) Superintendent Stephanie Starcher and the board has been a steward over those tax dollars.”

The worst-case scenario for the communal grid in the country would be either a natural disaster or attack. Such an event could leave millions without power, but Dynegy would be one of the first to boot that grid back up.

“We’re only one of six plants in Ohio with the black start capability,” said Ansell. “We have a backup jet engine air derivative which runs on natural gas separate from the plant that could be used to restart our units without any outside support.”

“We’re basically a self-sufficient island,” added Anderson. “Then once we’d get ourselves back up and running we could push out power onto the grid to get other plants up and going again.”

McCurdy added that even if for some reason the natural gas ignition within that backup had problems there are batteries on-site to kick-start the backup turbine in an emergency.

“The most efficient plants like this one are based on redundancy so that we can always be reliable,” he said.

A glance at the inner workings of Dynegy

No employee injuries on site in 16 years